To enhance your experience of our website, we recommend that you use Edge, Chrome or Firefox, as your current web browser is out of date.

South Africa needs to invest in its female entrepreneurs, because they have a critical role to play in the country’s socio-economic recovery, according to wealth management specialists, Citadel.

“South Africa boasts exceptional female entrepreneurs who are already playing a critical role in jump-starting the economy and getting the country’s food security, job creation and financial stability back on track after a tumultuous year, therefore we need to support them and help them succeed,” says female entrepreneurship expert and Citadel Advisory Partner, Kirsten Smit.

“More women-run businesses will be the tonic South Africa desperately needs because greater economic participation by women stimulates economies, reduces poverty and creates jobs,” says Smit. In South Africa, according to research by Development Economics, women-owned businesses established between 2018 and 2022 may generate an estimated R175 billion a year and create close to one million jobs. The World Bank also reports that women are critical for job creation.

Lack of funding, resources and skills training are still some of the greatest challenges female entrepreneurs face, according to global research. The Harvard Business Review recently found that less than 3% of venture-capital backed businesses in the United States were women-led, while Crunchbase data has shown that global venture funding for women took a dive in 2020. The World Bank and World Economic Forum also report that women-led businesses around the world still don’t have equal access to capital.

“We need to work on reversing these trends, because international research shows that empowering women holds enormous benefits for the global economy,” says Smit. For instance, a McKinsey Global Institute study found that advancing women’s equality could add $12 trillion to the global economy by 2025.

South African women have traditionally struggled with less access to capital and fewer assets than their male counterparts, and not owning property makes it harder for women to offer collateral for business loans – but studies show that women are excellent investors, because they often achieve greater credit turnover, and women-led start-up businesses often deliver double the returns of other businesses, according the Harvard Business Review.

Women also play a critical role in food security, as recently highlighted by the United Nations, which noted the essential role women play in transforming society’s agri-food systems and ensuring that societies gain greater, more sustainable food security in the aftermath of the pandemic.

According to UN Women, more than 60% of employed women in sub-Saharan Africa work in agriculture. Women also account for around 70% of smallholder farmers in the region, yet only about 17% of landholders in sub-Saharan Africa are female, and women also receive less than 10% of available credit and 7% of credit extension services, according to the international civil society organisation Solidaridad. “Women feed their communities and create essential agriculture and food related economic activity, so their importance in South Africa’s food economy cannot be discounted,” says Smit.

“In South Africa, the investment community needs to become more alert to the fact that women play an essential role in the food security supply chain and deserve to be supported through investment,” says Smit.

THE “SHE-CESSION” IN SOUTH AFRICA

By end-October 2020, South African business liquidations were up by 33.2% over the third quarter, representing a 20.8% year-on-year increase in liquidations, according to Statistics SA.

In addition, Sub-Saharan women, according to the International Monetary Fund (IMF), were disproportionately affected by the pandemic. The global 2021 Mastercard Index of Women Entrepreneurs, which tracks across 58 economies, also found that a staggering 87% of female business owners globally felt adversely affected by the pandemic, and that in South Africa 59% of female-owned businesses worked in sectors hardest hit by the economic downturn such as retail, restaurants, food shops and domestic services. The IMF and World Bank reported similar findings.

The Africa Report also recently reported on the so-called “she-cession”, saying that three quarters of South Africa’s youth are now unemployed, with women making up two thirds of the job losses during the pandemic.

“Right now, women need more public and private sector support to close the gender gap in the economy and reverse the disproportionate effects of the recession on women,” says Smit.

While Africa is ranked the top continent in terms of female entrepreneurship by the World Bank, women are still in the minority in South Africa’s entrepreneurial landscape. Although more than half of South Africa’s population is female, only 34% of small and medium enterprises are women-led, according to a Facebook, World Bank and OECD joint survey.

While gender equity varies from country to country, on average, men remain more likely to be entrepreneurs. In South Africa, the ratio of male to female entrepreneurial activity has changed from 1.52 (12.5 men to 8.2 women) in 2017 to 1.14 (10.9/9.6) in 2019, which means that female entrepreneurship is growing. “Although this is encouraging, considering that women constitute more than half of the adult population, this ratio should ideally be more equal,” says Smit.

The global Covid-led boom in e-commerce presents a massive, growing opportunity for female business owners. “But, for women to take full advantage of the rapid digitisation brought on by the pandemic, they need greater access to affordable internet and digital resources in this country. This will also contribute to closing the entrepreneurship gender gap,” says Smit.

“Clearly one of the first places where we can make a difference to the face of female entrepreneurship is in the sphere of funding via South Africa’s multiple female-focused government and private programmes and funds, including the Industrial Development Corporation’s Women Entrepreneurial Fund, the Business Partners Women in Business Fund, the Isivande Women’s Fund and the Enablis Acceleration Fund,” says Smit.

“Global research shows that women’s success is tied to the success of our communities and economies as a whole. With all the challenges facing South Africa right now, we need to invest more in women, not less,” says Smit. 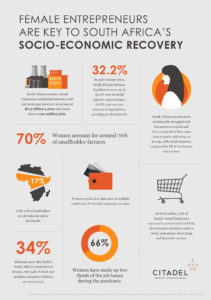 This website uses cookies to improve your experience while you navigate through the website. Out of these cookies, the cookies that are categorized as necessary are stored on your browser as they are essential for the working of basic functionalities of the website. We also use third-party cookies that help us analyze and understand how you use this website. These cookies will be stored in your browser only with your consent. You also have the option to opt-out of these cookies. But opting out of some of these cookies may have an effect on your browsing experience.
Necessary Always Enabled
Necessary cookies are absolutely essential for the website to function properly. This category only includes cookies that ensures basic functionalities and security features of the website. These cookies do not store any personal information.
Non-necessary
Any cookies that may not be particularly necessary for the website to function and is used specifically to collect user personal data via analytics, ads, other embedded contents are termed as non-necessary cookies. It is mandatory to procure user consent prior to running these cookies on your website.
SAVE & ACCEPT
Technical Support